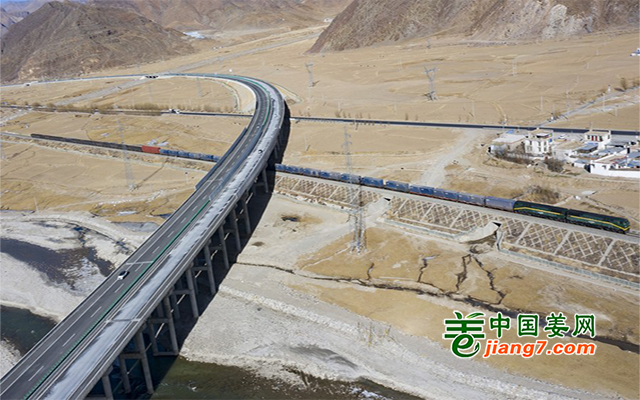 Aerial photo taken on Jan 28, 2021 shows a section of the Nagchu-Lhasa expressway and the Qinghai-Tibet railway crossing each other in Southwest China's Tibet autonomous region

The world's highest expressway - linking Lhasa, capital of the Tibet autonomous region, with the region's northern city of Nagchu - began operation on Saturday.

With a speed limit of 120 kilometers per hour and sitting at an average altitude of over 4,500 meters, the 295-km Nagchu-Lhasa Expressway is a section of the G6 Beijing-Tibet Expressway. The new expressway, the first between the two cities, will shorten the drive between them to three hours from more than six previously.

Gangkar Tsering, a resident of Nagchu, said the opening of the expressway is great news for him because he frequently travels between the two cities. Previously, he had to use the bumpy and often jammed G109 national highway.

"I have been operating a dairy products business in Lhasa for years, for which I have to transport milk and butter all the time, and the new expressway will greatly shorten the trip," he said. "The new road will help keep my dairy products fresh and unspoiled while I'm transporting them."

"Heavy investment has been made in the project to preserve wildlife and establish pathways for livestock along the expressway," he said. "Also, alpine meadow turf was stripped and replanted, and some bridges were made with long-span continuous girders to reduce the disturbance to the environment."

With the opening of the expressway, the total length of the region's expressway network has reached 1,105 km.

Residents have praised the expanded network for both the scenery and the time it saves them on the road.

Kunga Tsetan, another business owner in Lhasa, said the operation of the new expressway is a good thing for him, as he often drove back and forth on the G109, which runs parallel to the newly opened expressway.

"In the past, the road was always muddy and slippery when it rained or snowed. The trip took longer, so sometimes it was very frustrating," he said. "I like to drive on this highway, as I can observe wildlife wandering on the beautiful northern grassland."

With the Nagchu-Lhasa section open to the public, all there is left to complete on the G6, which is about 3,700 km long, is the section from Nagchu to Golmud, Qinghai province. Construction of the section may start during the 14th Five-Year Plan (2021-25) period, according to Tibet's transport department.